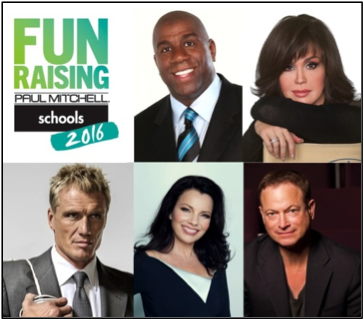 Paul Mitchell Schools will kick off their 13th annual FUNraising campaign on March 1, 2016, with a goal of raising $2.5 million for nine major charities and dozens of local nonprofits. Last year, Paul Mitchell Schools raised $1.7 million, bringing their 12-year total to over $15.2 million. They proudly report that the cost incurred in raising the $15.2 million has been less than 4%, an amazingly low amount compared to the national average of 25%.

Students and staff members from the 100-plus cosmetology schools will spend 11 weeks raising money for this year’s supported organizations:

Paul Mitchell Schools Dean and Cofounder Winn Claybaugh says, “We’re delighted to partner with nine returning charities that work tirelessly throughout the world for a variety of causes. Each celebrity spokesperson plays a personal and active role in motivating and encouraging our 13,000 future professionals as they raise money through thousands of grassroots events, from cut-a-thons and car washes to fashion shows and charity balls. Our celebrity partners belong to an elite group of wonderful stars who’ve supported us in the past, including Betty White, Dolly Parton, Larry King, Vidal Sassoon, and Leeza Gibbons.”

Last year, Paul Mitchell Schools raised $1.7 million, bringing their 12-year total to over $15.2 million. They proudly report that the cost incurred in raising the $15.2 million has been less than 4%, an amazingly low amount compared to the national average of 25%.

“We consider it a serious responsibility to be good stewards of the funds we raise,” Winn Claybaugh says. “We work hard to keep the costs low while showing our students the importance of making a difference.”

“People often ask why we promote FUNraising in our schools,” Claybaugh says. “Nowadays, it is so easy for businesses to focus only on the money that goes into their own pockets. That is not us. Our FUNraising campaign lets us give back to our communities, join together as a team for something important outside of work, and provide our students with opportunities to develop skills that will help them both in their careers and in life.”

All Paul Mitchell School leaders will conclude the FUNraising campaign with a four-day training featuring guest speakers Magic Johnson and beauty industry icon Sam Brocato. The annual FUNraising Gala, the highlight of the annual campaign, takes place on May 15, 2016, at the Beverly Hilton in Beverly Hills, California. The event celebrates all of the participating schools while raising additional money. For tickets and additional details, visit www.paulmitchellschoolsfunraising.org.

At Paul Mitchell Schools, we believe that education is an adventure and the learning experience needs to be fun and well rounded. Our courses focus on important technical skills and business knowledge with an emphasis on social and community responsibility. Our learning leaders are trained to draw out the artist in our students and prepare them to enter their chosen careers as community-conscious salon and spa professionals. Through our annual “FUNraising” campaign, we’ve raised and donated over $15.2 million in support of many charitable causes. We’ve built homes with Habitat for Humanity, fed thousands of African orphans, and supported the victims of AIDS, breast cancer, homelessness, abuse, and hundreds of other causes.

Established over 35 years ago, the Paul Mitchell network is nearly 100,000 salons strong and in 81 countries worldwide; every professional hairdresser knows the Paul Mitchell name. Now, with the arrival of Paul Mitchell Schools, we’ve taken the world of cosmetology education by storm! Visit www.paulmitchell.edu to learn more.

About the Supported Charities

Andrew Gomez Dream Foundation was founded to honor a successful Paul Mitchell School graduate whose struggle against mental illness ended tragically in suicide. The foundation helps cosmetology students, graduates, their families, and cosmetology-related enterprises. Funds have provided educational opportunities, hurricane relief, and support in the fights against breast cancer, domestic violence, and other destroyers of self-esteem.

Cancer Schmancer Movement, founded by Fran Drescher, is an education and advocacy organization dedicated to saving lives through prevention and early detection of cancer. By empowering ourselves and the people we love to become medical consumers, listen to our bodies, ask the right questions of our doctors, and seek second opinions, we can prevent cancer and, if we still end up with it, detect cancer in its earliest stages.

CAST (Coalition to Abolish Slavery and Trafficking) aims to assist persons trafficked for the purpose of forced labor and slavery-like practices and to work toward ending all instances of such human rights violations.

Food 4 Africa is committed to supplying at least one vitamin- and mineral-enriched meal each day to the children of Southern Africa, where the HIV/AIDS epidemic has left more than 11 million children orphaned. There are currently 3.9 million orphans in South Africa. Of these, approximately 2 million have been orphaned as a direct result of AIDS, and countless others have been orphaned as an indirect result.

No Limits is the only program in the world that teaches low-income deaf children the skills to succeed in school and in life through its national theater program and after-school educational centers that enhance their confidence and communication skills while providing the leadership and academic skills to be college ready. No Limits educates parents to be advocates for their deaf children and shows that they have the potential to go farther than they can imagine.

Thirst Project is the world’s leading youth water activism organization. In just six years, Thirst Project has mobilized more than 300,000 students and young people who have raised over $8 million, 100% of which has been used to build freshwater wells in 12 countries, giving more than 260,000 people safe, clean water.

A Word from Our Charity Partners

Fran Drescher, TV’s “The Nanny” and star of Happily Divorced, returns for her fifth year of FUNraising on behalf of Cancer Schmancer Movement, which she founded to help ensure that women’s cancers be diagnosed while in stage 1, when they are most curable. “Paul Mitchell Schools are a shining beacon of what a responsible 21st-century company should exemplify,” she said. “Their commitment toward philanthropy and the greater good is unsurpassed.”

Actor Gary Sinise, known as Forrest Gump’s Lieutenant Dan and CSI: NY’s Detective Mac Taylor, returns for the fourth year with his Gary Sinise Foundation, which helps build custom “smart homes” for severely wounded veterans. Gary said, “Paul Mitchell Schools’ support has made a positive impact on so many military and first responder families. On behalf of these grateful heroes, I thank you.”

Deaf comedian and motivational speaker Kathy Buckley has long been a friend to Paul Mitchell Schools, appearing at their annual Las Vegas Caper educational retreat for the past several years and speaking at numerous schools throughout the country. Representing the No Limits afterschool theater program for deaf children, Kathy says, “Paul Mitchell Schools have given our kids the wings to soar and reach new heights. Many deaf children feel alone and isolated, but your support lets them believe in themselves and confidently overcome the challenges they face. Your life-changing contributions have given these children and their parents the priceless gift of hope. We can never say thank you enough for that.”

Actor, director, producer, and martial artist Dolph Lundgren appeared at last year’s FUNraising Gala as a spokesperson for CAST, the Coalition to Abolish Slavery and Trafficking. Known for his roles as Ivan Drago in Rocky IV, He-Man in Masters of the Universe, and Gunner Jensen in The Expendables, Dolph also co-starred in the 2014 film, Skin Trade, an action thriller about human trafficking. Dolph says, “Thanks, Paul Mitchell Schools, for helping me and CAST fight human trafficking worldwide!”